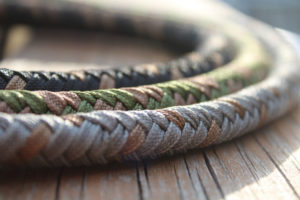 These whips are strong and flexible. When looped around an opponent’s neck many of the Gi chokes that are familiar in jiu-jitsu are quickly available. The primary grips are the same as the typical cross-collar Gi choke and the “Baseball bat” choke.

The special loop used for the “fall” section of the whip is also perfect for feeding the handle though to create a noose.  This can be used for choking or restraining limbs.

Put the Gi back into No-Gi grappling.

There are a ton of collar based gi chokes in Jiu Jitsu grappling and many of these chokes can be easily applied with a Combat Whip in the same ways. Once you close the distance with an opponent the whip can wrap around the torso or leg to control them, but once wrapped around the neck many choking opportunities quickly present themselves.